Where have all the gentlemen gone? 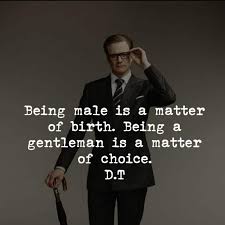 And I got so much reactions that I got the feeling that the world is in need of gentlemen.
And where have they all gone? Do they even exist anymore?

If you look at the typical male today, you might be dissapointed. What happened to honor, courtesy and manners? When came comments like damn, hot stuff and great ass the accepted way to show your interest in a woman?

Somehow I can't believe that all the gentlemen dissapeared. There are certainly lots of great men out there. But I get the feeling that they are scarce.

Men today put in just enough effort and charm to gain a woman's interest. To let her think he cares.  Like a cat on a string. He forgets that women have to be cared for, not that we are helpless, but we like to be pampered. And relationsships need maintaining.

Many men simply don't know their role in today's society. They hear mixed messages on what 'real men' should do and not do. Also from women who 'can take care of themselves'. Yes, we can, but that doesn't mean that we don't appreciate to be treated with value. And men who do shouldn't be viewed anti-feminist .

Let's be clear. A gentleman will open doors, pull out chairs and pay the bill. Not because he thinks she isn't capable but because he's interested, he values her and wants to show it. And empowered women can do all those things herself, but she can also afford a gentlemen his place without it diminishing her power, nor her independence.

I certainly wouldn't mind more gentlemen in my life!